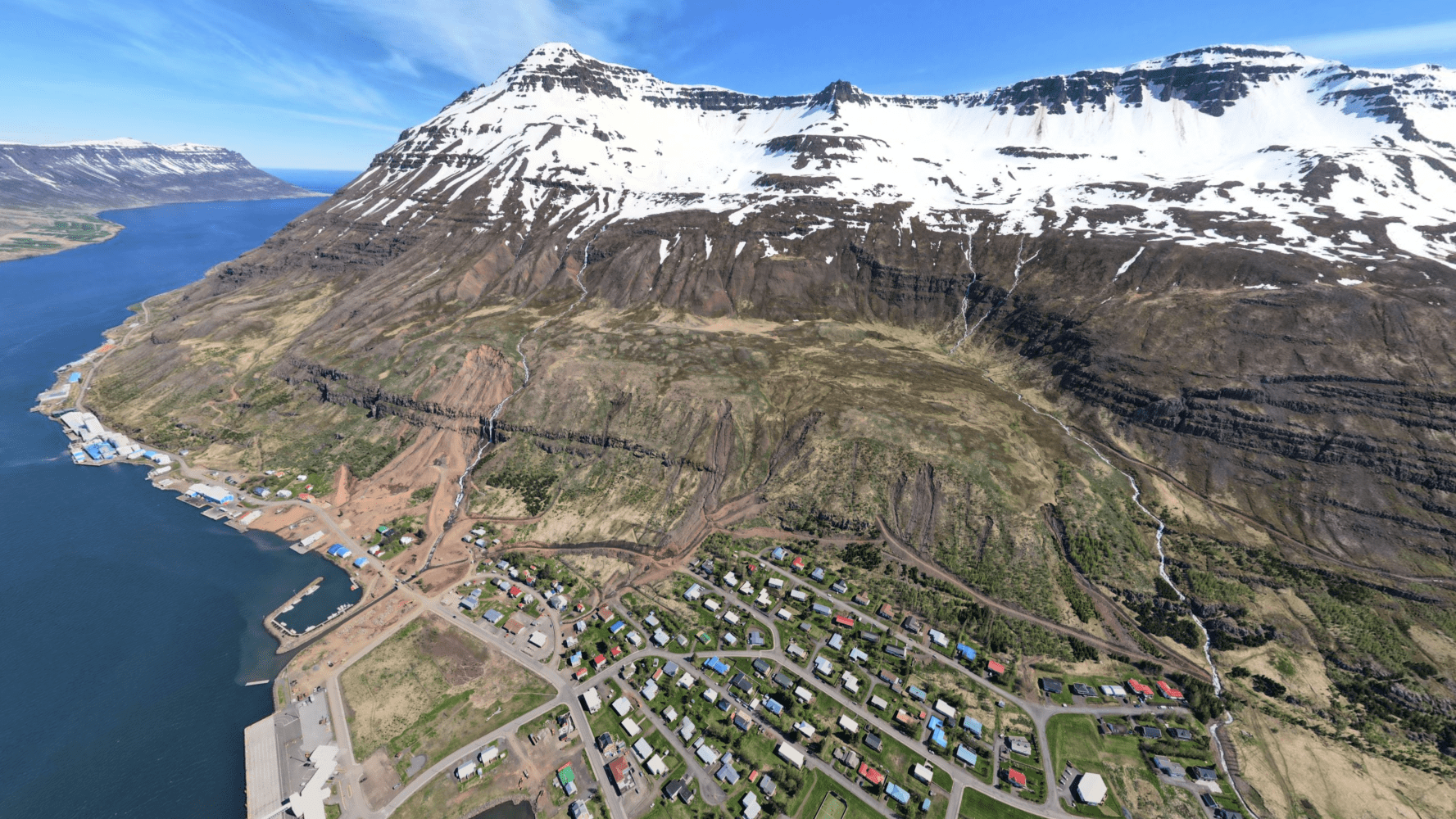 Mid-afternoon on 18 December 2020 the largest landslide ever to hit a town in Iceland, fell on the outskirts of Seyðisfjörður, triggered by days of heavy rain.
The destruction and economic loss were enormous.

It is miraculous that there were no casualties from this natural disaster. In spite of extensive evacuations as many as 30 people were in the are when the largest landslide struck, with many lives saved through pure chance.

A total of 13 buildings were destroyed. Four historically protected residential houses; The Silver Palace, which housed sever smaller businesses;a large sandblasting workshop and
several historic buildings owned by the Technical Museum.
Significant damage was caused to a number of other houses in addition to various infrastructures, pipes, plots and road systems. Companies small and large suffered from a halt in their operations.

Seyðisfjörður is one of the most complete early settlements of wooden houses in Iceland.
The largest landslide fell in the Búðareyri are of town known as the cradle of Seyðisfjörður, housing a mix of businesses and workshops, residential area, as well as the museum site.
The landslide devastated multiple historic houses as well as destroying a good part of the museum collection, with Iceland’s cultural and architectural heritage
suffering some of the most damaging consequences known in recent times.

The community and residents

The natural disaster dealt a huge blow to the community of Seyðisfjörður, with a global pandemic raging simultaneously.
Homes and workplaces were lost, with many inhabitants narrowly escaping the landslide. Many have suffered psychological consequences, a major blow
has also been dealt to the town-‘s economy and questions about the future remain unanswered. Despite everything, the community is marked by
great solidarity where people wish to contribute to the recovery of the inhabited area.

A systematic clean-up operation began immediately in the area affected by the landslides, succeeding beyond expectations. Before clearing efforts could
begin it was necessary to go through the rubble an debris carefully in order to recover personal belongings and the museum’s artifacts, to the extent possible.
In the spring 2021, seeds were planted in the landslide wounds for the purpose of restoring lost vegetation.

The scale of the largest landslide cam as a surprise although large landslides are known to have hi the area in pre-historic times and the hazard zoning indicates danger in the southern part of the town.
Loose materials in the hillside above the settlement are slowly creeping downslope. The warming climate increases the danger of landslides from a permafrost area high in the slopes of Mt. Strandatindur.
Extensive work in protection measures lies ahead in addition the the emergency defenses constructed in 2021. The biggest challenges will be to drain the sediments in the lower mountainside to
prevent movement downslope and improve the stability of the loose materials.
Monitoring has been greatly improved e.g. measuring pressure in boreholes, using automatic GPS instruments and a Total Station to monitor the movement of loose materials.